"For Mazan Dana"- 19th journalist killed in Iraq.  Dana was a Palestinian journalist who worked for Rueters.
He was filming when he was killed by US forces outside Abu Graib Prison.

In the installation, Dana's camera is an LCD screen that loops the video footage that he was filming when shot to death. Day of the Dead, SOMARTS, 2003.

The Unconscionable Death of Mazen Dana 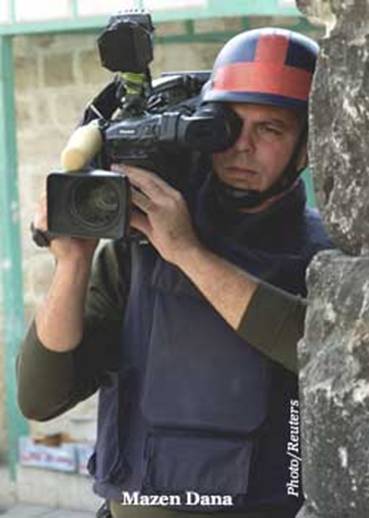 They march into history, the fallen soldiers of journalism who bear witness,

invincible, driven, unyielding in their determination to unearth the truth, expose what is, courting danger and the unpredictable. They run on adrenalin and guts, fierce dedication, the work an obsession, a demon, a mission for which they will shed their blood and offer up their lives in sacrifice.

His work was his life, tough and dangerous, on the frontiers of battle, Mazen Dana, a veteran conflict cameraman for Reuters and a Palestinian, killed by machine gun fire from a U.S. tank while filming outside the Abu Ghraib prison west of Baghdad, late on the afternoon of August 17, 2003.

Mazen Dana, 43 years of age, married and the father of four, the recipient of The Committee to Protect Journalists International Press Freedom Award of 2001 for his heroic work in the cauldron of Hebron.

He was to die in Baghdad.

The videotape in his camera retrieved after his death disclosed two oncoming U.S. tanks with American soldiers riding on top, the sound of six shots ringing out from the tank gunners, the camera askew and toppling to the ground after the first shot.

Stephan Breitner of France 2 told the Associated Press, “They knew we were journalists. After they shot Mazen, they aimed their guns at us. I don’t think it was an accident. They are very tense. They are crazy.”

Dana’s soundman, Nael al-Shyoukihi, an eyewitness to the killing, stated that the Reuters team had identified themselves to U.S. soldiers guarding the perimeter of the American-controlled prison, and were given permission to film. A small group of journalists were in the area after a fierce overnight mortar attack had left six Iraqi prisoners dead, wounding 59.

They had filmed an overview of the prison from a nearby bridge and were about to depart when Mazen observed the approach of a convoy of U.S. tanks up the road. He quickly set up his camera to film the approach of the armored vehicles against the backdrop of the prison; Shyoukihi lit a cigarette.

“They saw us and they knew about our identities and our mission.”

The vehicles were at close range, approximately 55 yards away [50 meters], Shyoukihi would recount to CPJ investigators.

Mazen had been filming for about ten seconds when suddenly, with no warning or exchange of words, several shots rang out from the lead tank. Shyoukihi dived for cover. Mazen screamed and clutched his hands to his chest, bleeding profusely from the horrific exit wound in his back. Six American soldiers quickly surrounded them!

“You killed a journalist!” cried out Shyoukihi.

“Stand back!” screamed the soldier who had fired the fatal shots.

“They tried to help him but Mazen bled heavily. Mazen took his last breath and died before my eyes,” Shyoukihi said softly.

Another eyewitness, Reuters cameraman Essam Nadin, shaking with sobs, “The tanks came, he was taking pictures and they just started shooting. It was his last day here. I came to replace him. What am I supposed to tell his wife?” 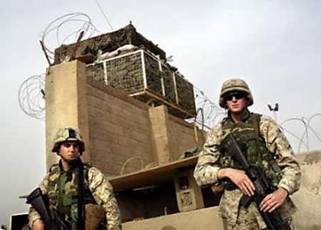 The death of Mazen Dana drew a worldwide outcry. Reuters, The Committee to Protect Journalists and Reporters Sans Frontieres in Paris all expressed outrage at the killing.

“The latest death is hard to bear,” said Reuters chief executive Tom Glacer in a statement. “That’s why I am personally calling upon the highest levels of the United States Government for a full and comprehensive investigation into this terrible tragedy.”

The Committee to Protect Journalists charged that the shooting “raises serious questions about the conduct of U.S. troops and their rules of engagement.”

Reporters Sans Frontieres demanded a full public investigation by the U.S. military and accused the United States of failing to conduct proper public inquiries into its previous killings of journalists four month’s earlier, notably those of Reuters cameraman Tara Prostyuk and Spanish cameraman, Jose Couso of Telecinco, killed during the U.S. shelling of Baghdad’s Palestine Hotel, the unofficial headquarters for the world’s news media during the Iraq invasion.

One month later, on September 22, 2003, the United States Central Command in Iraq [CENTCOM] officially announced that it had concluded its investigation into Dana’s death and stated that while his killing was “regrettable,” the soldiers had acted “within the rules of engagement.”

U.S. Army spokesman, Lt. Col. Guy Shields: “I can’t give you details on the rules of engagement but the enemy is not in formations, they are not wearing uniforms. During wartime, firing a warning shot is not a necessity. There is not time for a warning shot if there is a potential for an ambush.”

The investigation concluded that the shooting of Mazen Dana was “justified.” 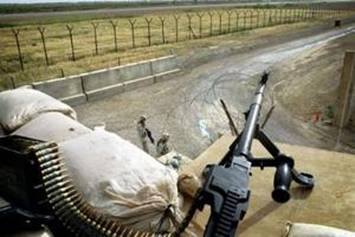 He had come to New York to receive The Committee to Protect Journalists International Press Freedom Award of 2001, for his brave and moving work reporting on one of the most dangerous beats in the world, the West Bank city of Hebron, the city of his birth. In this tragic place, journalists were routinely and deliberately targets of violence.

“To be a journalist and cameraman in a city of lost hope like Hebron requires great sacrifices.

“Since I’m working in Hebron about 14 years as a cameraman and journalist, I injured, uncounted time and arrested many, many, many times. The type of injuries that I got, three times live ammunition, about seventy to eighty times rubber bullets. About one hundred time beating from soldiers. Two times my hand were broken for uncovering my stories in Hebron….

“We are journalists who are neutral. We carry a gift. We show the world what’s going on. We are not part of the conflict…And journalists and especially the cameraman showing the people the truth. My motive to be and to continue my work even if it is costed for me a lot of problems and a lot of injury; my motive to continue my work even if it costs me my life, because journalists have a message and they carrying the message…and they lead the audience to see what’s going on, to judge….Even soldiers they want to do something. They see a camera, they are afraid of cameras and they stop, and many many times they thank us because we are there, otherwise it will be a massacre…Because I know it is the business of the carrier of the terrible. And I, any, no one, nothing can stop me from doing my work as a journalist.”