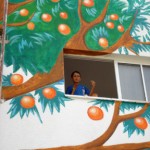 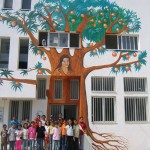 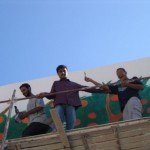 Mural designed and painted by and with the staff of the Tagrheed Cutltural Center for Youth.   The town had been under total curfew for a month and under siege for much longer.  The Israeli army had destroyed thousands of acres of orange groves.  The director of the center said he wanted the children to remember what the orange trees looked like.  In 2004 Break the Silence was Susan Greene and Eric Drooker. Below is Eric’s article about the mural in Beit Hanoun.

GAZA STRIPED, An Artist Under Occupation, By Eric Drooker, 2004

It was simultaneously a very good thing, and a very bad thing.

Neither Susan nor I expected to be allowed to enter Gaza in the first place. All of our Palestinian friends told us it was impossible and, at any rate, too dangerous these days….

But here we were, walking through the goddamn check point, with a two hundred pound suitcase full of acrylic paint and two dozen brushes. Pleasantly surprised to be entering the Gaza Strip, on a hot mid-east morning, our euphoria proved to be as short lived as water on desert sand.

The Israeli government has, for months now, held the Gaza Strip under tight, military lockdown, with daily shelling, targeted assassinations, house demolitions, and a generalized assault on the teeming local population. Practically no one is allowed to enter, or leave Gaza at this time. The checkpoint, which under “normal” circumstances is crowded with Palestinian laborers leaving for, and returning from work, is all but deserted. Susan and I were among the last grains of sand to fall through this concrete hourglass. (The check-point, actually, resembles a New York City Subway turnstile, but with lots and lots of barbed wire…and a soldier pointing a machine gun at your head.)

The entire Strip is a sprawling, densely populated, outdoor prison–one of the most crowded zones on the planet–with Apache helicopters and F-16s (all made in the USA) buzzing through the air like insane, metallic hornets.

We spent the first night with a family who live, with their four daughters, in a sixteen-story high rise in Gaza City. (Susan had become friends with them on a previous visit, years back.) The family’s father, Nasser, arranged for us to stay with his seventy year old mother in the nearby village of Beit Hanoun, which has been under a particularly intensive siege for the past four weeks. A month ago, the military entered this lovely village of citrus groves and vineyards, and bulldozed every last orange tree, lemon tree, grapefruit tree and grape vine in site. Every last fucking one.

Sharing the room with us, for our next three nights in Beit Hanoun, was a young orange tree in a large ceramic pot. Was it being hidden in this second story room? Upon closer inspection, we noticed that it had a golden chain wrapped around its trunk, locking it, desperately, to the floor. For the following three nights, I slept with this young tree at my feet.

Earlier this month, the army also bombed and/or bulldozed forty some-odd wells in the village. (The region of Beit Hanoun has the most plentiful underground sources of water in Gaza…which is what the current military incursion is really all about: Water for Israel.)

No one is permitted to enter, or leave this village, this prison within a prison, encircled by soldiers with M-16s, tanks, bulldozers, and helicopters, around the clock.

At daybreak, we silently loaded our heavy-assed suitcase of paint and brushes onto a splintered wooden cart pulled by donkey, and quietly slipped, undetected into town.

I immediately noticed that the landscape was littered with corpses of trees, a most horrifying site. A war atrocity. Fruit withered on the vine…bright oranges turned dusty brown, under the white-hot sun. This village, which, for countless generations, has been a prosperous farming community, is now, suddenly, a desert. Quite literally overnight, Beit Hanoun, which, from time immemorial, was legendary for its sweet abundance, has been stripped naked.

Everybody we met, and stayed with for the next three days, was visibly heartbroken, bewildered…traumatized. Too full of grief to feel anger. Too full of sorrow to feel rage.

We met with the director of the local youth center, who was a cousin of the family we’d stayed with in Gaza City. He was a handsome man, about my age, with lines of angst etched deep into his warm face. He was responsible, each day, for the hundreds of girls and boys who passed, barefoot, through the center.

Of course, there was nothing much that he, or anyone in the village could do, but worry, and wait. What would the Israeli army, (solidly backed by both Bush and Kerry) do next? Start bulldozing homes? Poison the last remaining wells? Shell an unpaved village of sandy dirt roads, uprooted trees, donkeys, and scattered herds of goats? Chain-smoking, he agreed to let us organize a mural project for youth center’s front wall.

A make-shift scaffolding was quickly erected against the face of this three story, stucco building. I immediately began to sketch, in charcoal, the outline of an enormous tree, branches reaching up to the roof, roots reaching into the ground.

With the regular RATATATATATATATATAT!! of machine gun fire in the background, (heard every half hour or so, day and night…) Susan and I poured out a large bucket of Viridian Green, always a good color for foliage, and handed out brushes to an energetic crew of teenage boys–brothers and friends of those recently killed–and got right to work. I mixed up a can of Raw Umber, with a splash of Sienna, and painted the tree’s thick trunk around the front doorway. Whenever anyone entered the building, they were entering the body of a large and ancient tree. Above me, Taleb, Samir, Mahmoud, and Susan were busy painting in the tree’s leaves so furiously, that they quickly ran out of Viridian Green. Fuck…I knew I should have brought more Viridian!

I frantically mixed a quart of Cobalt Blue and Yellow Ochre together, yielding a curious Olive hue, and we were back in business, with enough green to finish painting all the leaves.

A running joke, which circulated up and down the scaffolding, and evoked wild laughter, was that when the soldiers see this giant tree, they would immediately uproot the entire building.

After we ate a brief meal on the floor, Mahmoud began thumping loudly on an hourglass-shaped hand drum, and suddenly we were all up and dancing, hysterically, to this odd, yet strangely familiar rhythm.

And then it was back to work. Special joy, and attention was given to painting the numerous, large, shiny oranges, which hung, plump and ripe, from every branch of the tree.

Eric Drooker’s paintings are frequently seen on covers of The New Yorker, The Progressive and The Village Voice, and In These Times. He can be reached through his website: www.Drooker.com