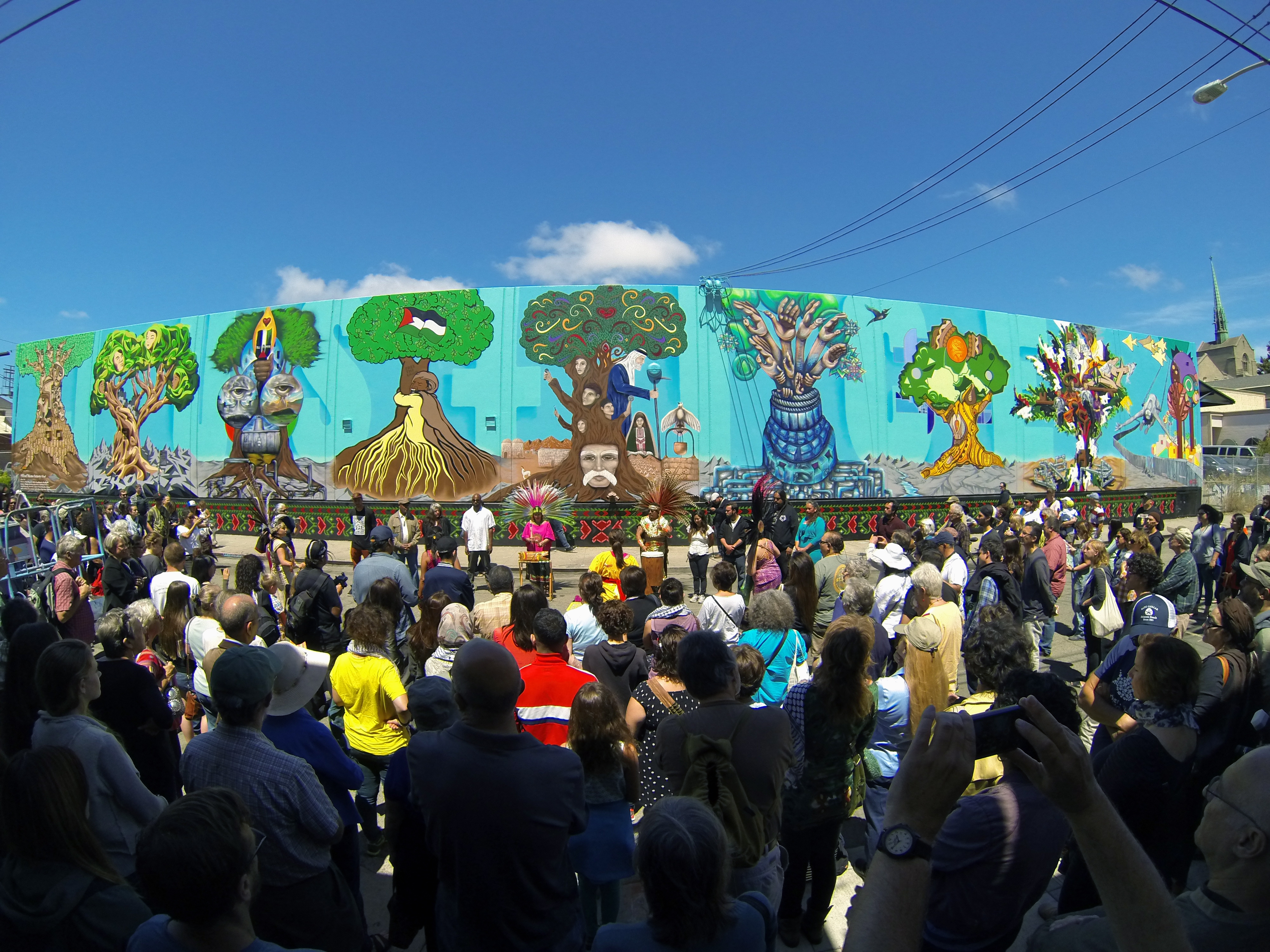 The Estria Foundation (TEF) is a non-profit organization with offices in California and Hawaii. TEF creates art in public spaces locally and globally with artists, youth, educators, and activists in order to raise awareness and inspire action in the movement to resolve human and environmental issues. The Foundation’s goal is to educate and engage youth on the intersections of art and movements for social justice.www.estria.org

Art Forces (formerly Break the Silence Media and Arts Project) works in the intersection of trauma, memory, creativity, resilience and resistance, making visible the connections between struggles for social justice globally and histories that have been obliterated or forgotten. Starting in 2001, Art Forces has collaborated with grassroots organizations in Palestine’s West Bank, Gaza and Lebanon to create public art projects aiming to educate and engage US audiences.www.artforces.org

NorCal Friends of Sabeel is a project of Friends of Sabeel—North America, a non-profit, tax exempt, Christian ecumenical organization seeking justice and peace in the Holy Land through nonviolence and education.  www.fosna.org/content/norcal. 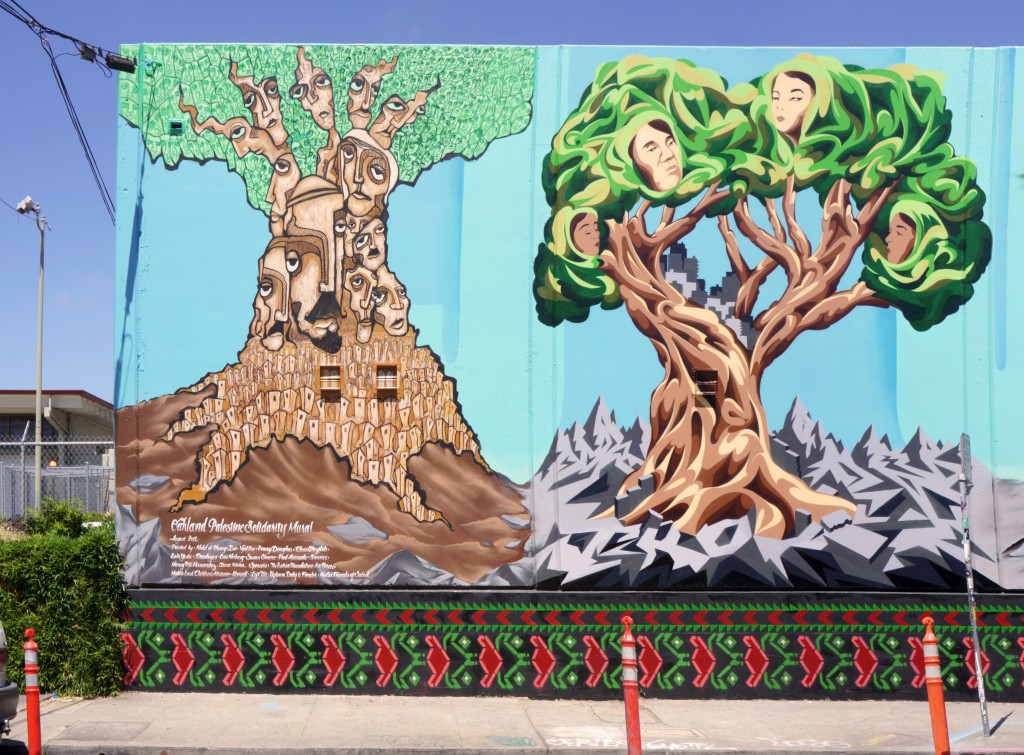 The image used for this mural was inspired by the Syrian singer/songwriter Sameeh Shqeir. The song’s chorus says: “we die like trees, standing up”. Palestinians have endured many hardships, and ongoing ethnic cleansing, as a result of the colonization of their land by the apartheid, Zionist, Israeli-state. Yet, Palestinians remain resilient in their struggle for liberation. As a people, we would rather die on our feet than live on our knees.

The piece represents our connection to the land. That native people of all nations are directly connect to the natural elements. Taking our land, strips away parts of ourselves. The sharp mountains represent the narrow ways of thinking and the organic movements of the tree represent open free-flowing thinking which helps elevate our communities. The natural elements are breaking apart the man-made borders/barriers that separate us. 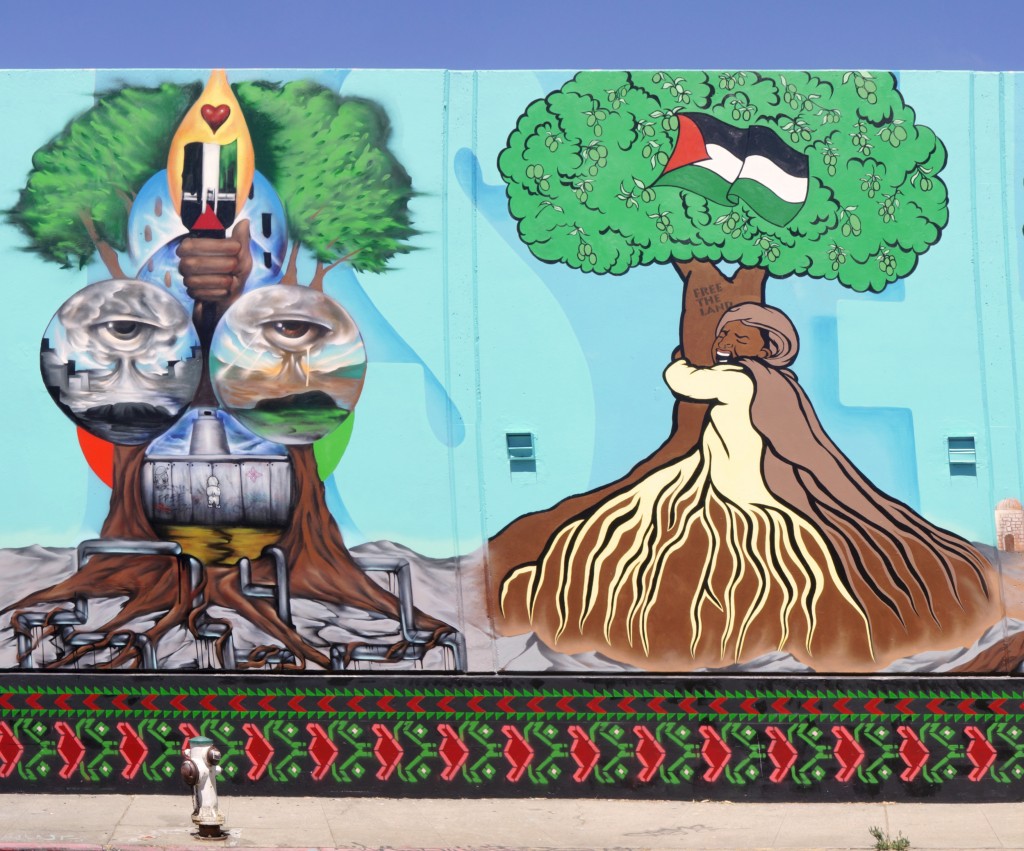 It’s has truly been an honor to the fullest degree to have been asked to contribute art work to the collective Palestine Solidarity Mural Project and to have support from all the amazing contributing artists.

I accepted the offer because of it’s collective spirit and it was another great opportunity to express visually my solidarity with the Palestinian people's just cause. The intention of my contribution to the mural is to visually express the pain and suffering deeply rooted in the Palestinian’s resistance to free their land of occupation and theft. 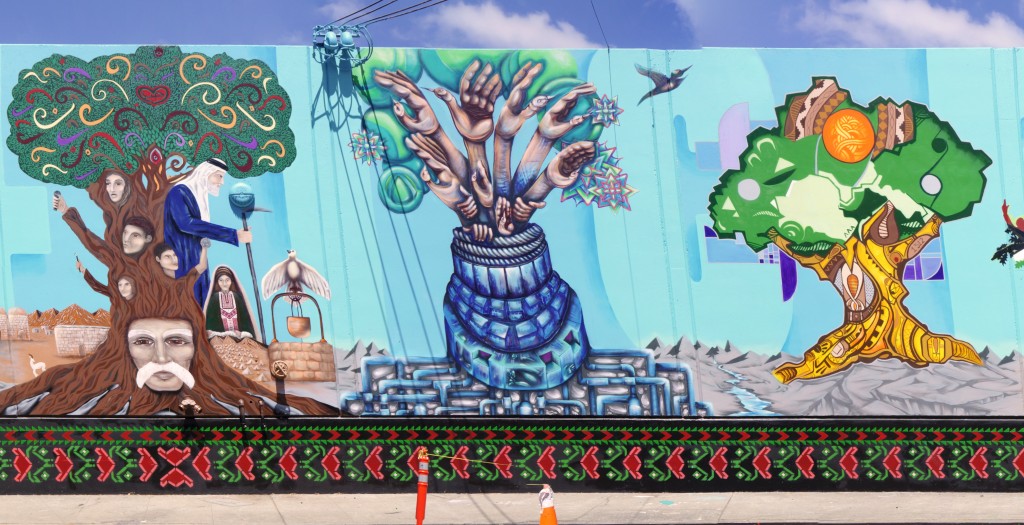 Our history shall be known, through the pen, through the microphone, and held tight like a rock. Inside us is the cry of humanity. Free Palestine

From Amache to Palestine: It represents a connection of the Japanese Internments Camps to the state of Palestine today. Palestine is subjected to unspeakable human rights violations and I feel it is my duty as a US citizen whose tax money supports the Israeli-state to speak out against the occupation. My family was forced into captivity much like the Palestinian people are corralled into the largest open aired prison today. I paint to voice my solidarity with the Palestinian people and my dream for their rights to freedom and self-determination. Boycott, Divest and Sanctions against the Israeli-state. 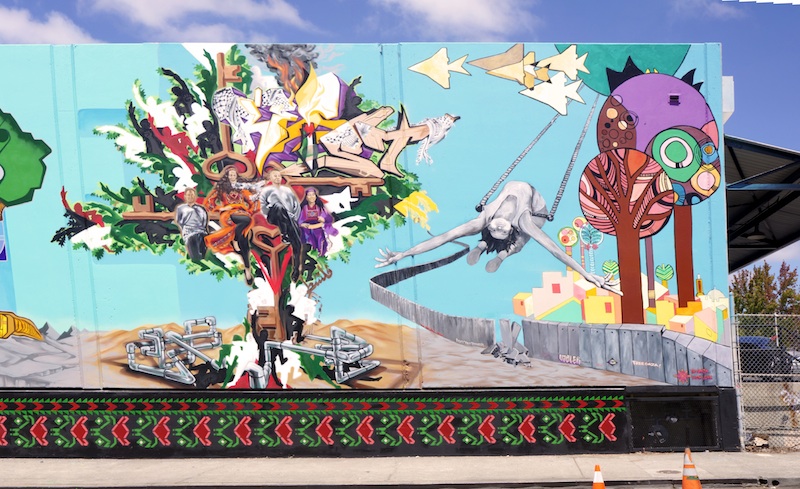 Like a sling & a stone, this paint, this song, this dance is what I know. Where oppression of others is happening, solidarity support of the victimized & condemnation of the genocide is the fire I bring.
The Black Panther Party for Self-Defense of Oakland explained their name by saying that if a cat is forced into a corner it will lash out and defend itself. The same could be said about Palestine: trapped behind “security” walls & attacked. It’s right to rebel, it’s defending your life to resist injustices & I support the need for human dignity. One is not free when others are oppressed. Take a stand of solidarity for the indigenous of the land & the Palestinian people.

I embody the fact that Zionism does not equal Judaism. My 25 years of public art in refugee camps in Palestine and Lebanon builds on the historical legacy of Jews who did not and do not support Zionism. Zionism and the occupation of Palestine desecrates the memory of Jews and all those who perished in the Holocaust of Europe. I have painted a trapeze artist, pictured in an electrifying moment of her craft, knocking down sections of the apartheid wall. In conjunction with Gaza artist Deena Matar’s whimsical trees, buildings and bomber planes, the section embodies pathos and a sense of extraordinary potential for liberation. Success is possible only with great coordination, tenacity, courage, teamwork, vision and humor, echoing some of the necessary traits to survive oppression and struggle for social justice.

Dina Matar uses her art as a way to represent her surrounding reality in Gaza from a perspective that is full of hope and optimism rather than encumbered by dark and lifeless colors. ‘Through my art I try to rekindle positive feelings’.Dina Matar wants to provoke the viewer to probe the meaning of her work, to ponder the closed circles and the overloaded houses, and at the same time to search for freedom in the colorful spaces and long lines.

The Oakland Palestine Solidarity OFF THE WALL is a series of events and exhibits held across the street from the mural at the Uptown Body and Fender shop.  They include:

Debke and Queer Tango dance at the Mural, performance by Young Gifted and Black. Art exhibit - posters for economic activism. 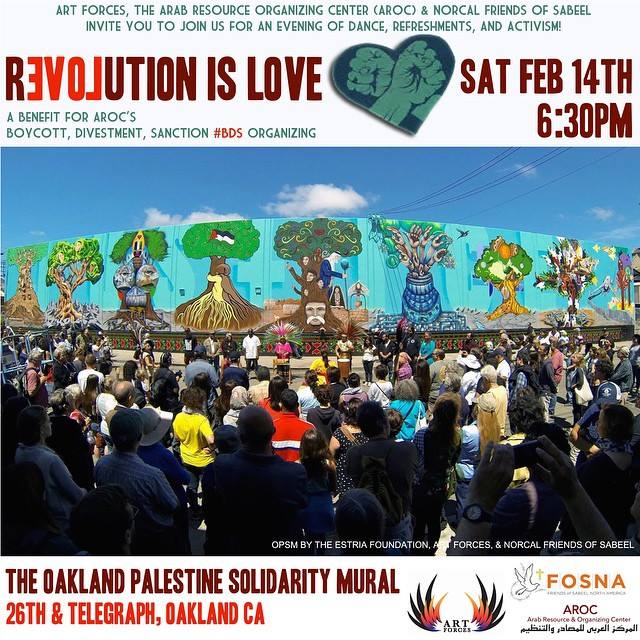 debuted during April's First Friday, 2015. It featured the social movement work from over a dozen local organizations as well as photographs from artists from Gaza. AROC, Eastside Arts Alliance, Critical Resistance and Art Forces came together to close this exhibition with a standing room only round table discussion about art and resistance. This collaboration highlighted connections among community struggles and cultures of resistance that challenge state violence, policing and prisons. Click here to see photos.

Sahar Abassi Baidon-Lecture and exhibit of Room No 4

Deputy director of Madaa Creative Center and photographic report of the impact of incarceration by Israel on children of East Jerusalem.
Produced with Middle East Children's Alliance 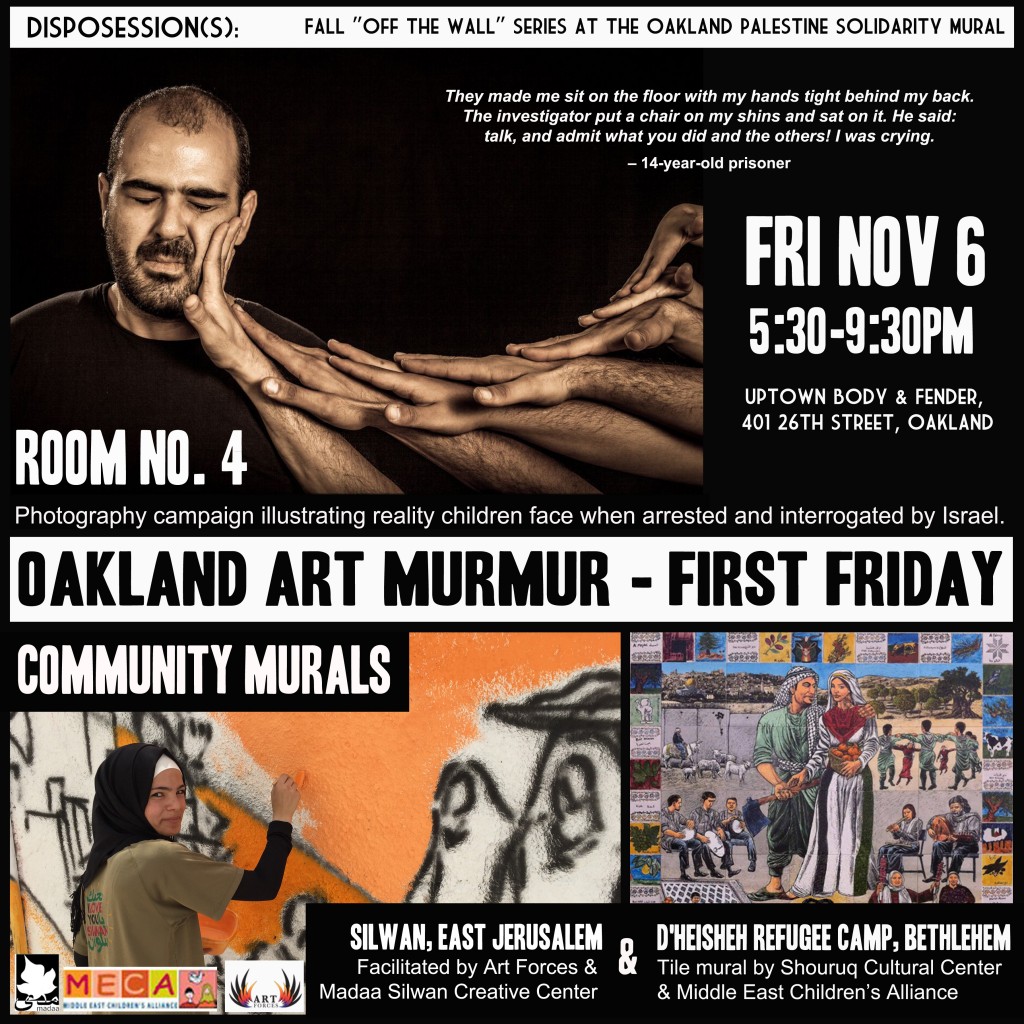