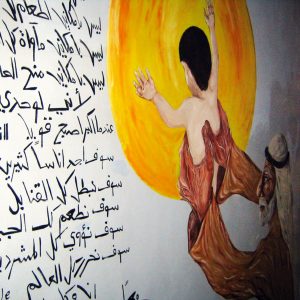 2001
A four-story mural produced in collaboration with the Middle East Children’s Alliance (MECA), in the Ibdaa Cultural Center in Dheisheh Refugee Camp in Bethlehem. The mural  hugs the  stairs and tells a history of Palestine, one era per floor, ending with hopes and dreams for the future.

The Ibdaa Cultural Center is a grassroots community-based project in the West Bank‘sPalestinian Dheisheh refugee camp. The name, “Ibdaa,” (ابداع) is translated from Arabic as “creation” or “creative ability” – “To Make Something Out of Nothing.” Since being founded in 1994, Ibdaa Cultural Center, with  long-time partner the Middle East Children’s Alliance, has served more than 1,200 children and youth annually and provides employment and income for more than 70 families in the refugee camp.

The mission of the Ibdaa Cultural Center is to create a positive atmosphere for children and youth in the refugee camp to assist them in developing competence, creativity and leadership skills through a range of social, cultural and educational activities.

The Ibdaa Cultura Center strives to empower children and instill the confidence and discipline necessary for them to overcime the obstacles of their difficult conditions while simultaneously educating the international community about the Palestinian refugee issue.

Ibdaa strives to empower the children, youth and women in Dheisheh camp, instilling in them confidence and strength while also educating the international community about Palestinian refugees.

Through art, dance, music, media, education, and sports, Ibdaa helps children and teenagers to share their experiences and dreams for the future with each other and with people around the world. Every activity at Ibdaa incorporates the values of democratic process and respect for human rights, providing a secular, humanist, and coeducational experience for Dheisheh’s children, youth, and women.

Ibdaa has become one of the most successful community organizations in Palestine, playing a vital role in the community’s survival and vitalization – particularly after the Intifada started – by organizing events, art projects, and emergency activities. Ibdaa’s extraordinary achievement is due to the successful integration of grassroots work in Dheisheh and the solidarity work in the international community. Ibdaa’s alliance with activists and organizations around the world goes beyond a traditional relationship based on financial support. Ibdaa has forged a strong relationship with its supporters in the areas of education and advocacy.

Ibdaa currently serves over 1,500 children, youth and women each year and provides income to 70 families in the Dheisheh camp through employment and income generation projects.

The Children of IBDAA from Global Information Services on Vimeo.

A thirty minute documentary released in 2002 and entitled “The Children of Ibdaa: To Create Something Out of Nothing” focuses on the Ibdaa Cultural Center’s children’s dance troupe. The children’s performance expresses the history, struggle, and aspirations of the Palestinian people, specifically the right to return to their homeland.http://www.cinesmith.net/children_ibdaa.htm

The documentary producer, S. Smith Patrick, interviews the dance troupe’s refugee camp children, ages 10 to 14, to explore the history of displacement from their villages in historical Palestine, the physical and emotional stress of life in a refugee camp, and how they mix politics and dance.

The video documents the dance troupe during their United States tour sponsored by Ibdaa’s long-time partner the Middle East Children’s Alliance, and in Dheisheh refugee camp. The video culminates in a visit by the children to their grandparents’ demolished villages from which they were expelled in 1948. The members of Ibdaa bring the Palestinian story to Western audiences through performance of the traditional debke dance, preserving Palestinian culture in a creative and non-violently method while addressing the brutal political reality of their lives in a refugee camp.

The film has won dozens of awards and been screened internationally.[1]